Between the years of 2010 through 2011, and as the CleanScapes project director, I was contracted by KPB to survey every public road in Clinton and the western portion of Lycoming County.  The eastern Lycoming County survey was performed by the Lycoming County Planning and Community Development Department.

Our objective was to locate illegal dumpsites on public land and report our findings to KPB. We did not document dump piles generated on private property. The survey focused on sites where unassuming landowners — both public and private — are the victim of illegal dumping activities.

With funding provided by the PA Department of Environmental Protection, KPB’s state-wide mission began in 2005. In 2013, the Keep Pennsylvania Beautiful Illegal Dump Survey Program completed surveying every county in the state. The final report identified 6,487 illegal dumpsites containing an estimated 18,516.83 tons of trash. The report can be viewed here.

Six years later, in 2016, I revisited seven of the Lycoming County sites.

The homecoming road trip was splendid. Slender winding roads lead up, down, and around forested ridges channeled with free-flowing creeks and out-of-the-way homes and farmsteads.

And then there they were. Silently, the inanimate objects stared back at me.

Tires, lawn furniture, refrigerators, rain soaked mattresses… They taunted and dared me to figure out how they were to be removed considering they rested in a ridge valley 50 feet straight down from my roadside vantage point.

Removed they were. In 2018 CleanScapes returned with a force of 36 community members. 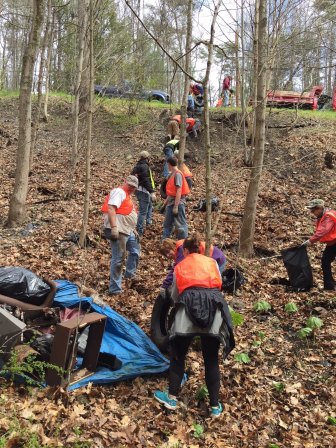 On April 28th we climbed up, down, and through forested ridge and valley terrain flushing out 1.73 tons of tires and 1.38 tons of trash in 2 hours.

The combined 3.11 tons (6,220 lbs.) was lifted at least 4 times — raised off the valley floor then carried, rolled and trudged up to the roadway. From the roadway items were lifted into a truck bed and then they were unloaded into a roll-off dumpster. Collectively we lifted 24,880 pounds in 2 hours. Aleve® anyone?

Beaten down? No Way!

At the end of this adventure I experienced emotions that are universally shared when one completes any purposeful, extreme outdoor challenge. Relief, smiles, captured camaraderie… and then the self-imposed question returns. It’s heard by anyone who feels unsettled until they are looking down at the next mountain of tires to extract, “The next CleanScapes challenge is…?”

Post-script. This event’s success was made possible by the continued support and event attendance by CleanScapes volunteer participants. They all share a steadfast lack of leniency for littered landscapes and waterways. Rounding out the cleanup team was our dedicated and highly-skilled veteran CleanScapes team “R&R” (Rick Barner and Raymond Mosser) and Joanne Heimer. They attend events year after year and their work ethic and sense of joy inspires and safely leads the newbies.

We also acknowledge and express our gratitude to the local supervisors of Piatt Township and Watson Township. Employees Mark Deitrick, Allen Green and Jim Seltzer drove trucks and took on refuse transportation responsibilities admirably. Unloading their trucks was the Lock Haven University “M&M” team made up of Mark Amoroso from Bethlehem and Michael Mayfield from Port Matilda.

Documenting every item collected was veteran CleanScaper and Mechanicsburg-based Don Lysle. Assisting me to plan the event was graduate student Patrick Smith from Lock Haven.

The Jersey Shore Ridge and Valley community cleanup funding was provided by a 2017 grant awarded to CleanScapes from the Roscoe M. & Edith M. Wolf Fund at the First Community Foundation Partnership of Pennsylvania.

Thank you all for making our 120th clean up event fun and successful! 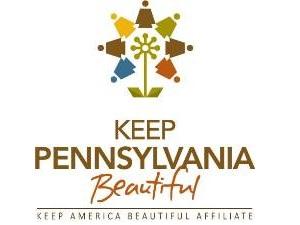 Our Volunteers in Action